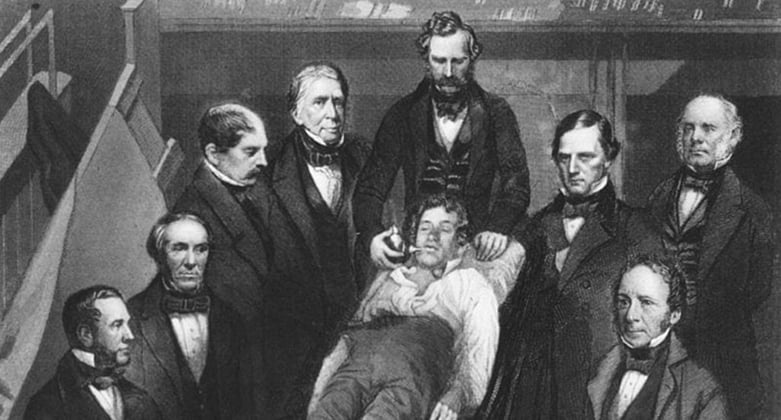 Modern medicine would not be possible without anesthesia. An early form of anesthesia was first used at Massachusetts General Hospital in Boston by dentist William T.G. Morton and surgeon John Warren on October 16, 1846.

In the latest installment of our Medical Milestones series, the UMHS Endeavour takes a look back at the history of anesthesia for future doctors at American and Caribbean medical schools We will include information from an article by Dr. Howard Markel on PBS.org and Wood Library Museum.org and other sources. Also look for upcoming posts about anesthesia on “Throwback Thursdays” on the UMHS Facebook page.

Early anesthesia can be traced back to ancient times (Babylonians, Greeks, Chinese and Incas), but one of the first European accounts occurred in the 1200s when Theodoric of Lucca, an Italian physician and bishop,  "used sponges soaked with opium and mandragora [from the mandrake plant] for surgical pain relief," according to Britain's History of Anaethesia Society (www.histansoc.org.uk/). Hashish and Indian hemp were also commonly used as painkillers.

Up until the mid-1800s, however, surgeons could not offer patients much more than opium, alcohol or a bullet to bite on to deal with the agonizing pain of surgery. Britain’s Daily Mail describes medicine during the U.S. Civil War as a grisly ordeal. “A blood-curdling range of saws, knives and sharp hooks were used to administer much-needed surgery to maimed fighters,” the paper wrote back in 2011. “But rather than being comfortably anesthetized, the soldiers had to grit their teeth through the pain of having their limbs amputated”.

Medicine was still primitive during the Civil War (1861-1865), but in the 1840s and 1850s, American doctors were working hard to develop anesthesia. 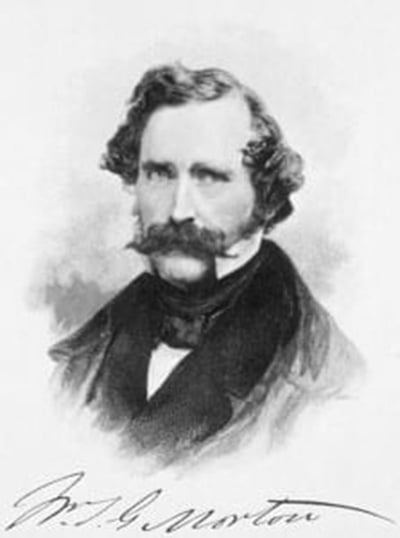 On October 16, 1846, Boston dentist William T.G. Morton used sulfuric ether to anesthetize a man who needed surgery to remove a vascular tumor from his neck, according to “The Painful Story Behind Modern Anesthesia” by Dr. Howard Markel on PBS.org.

Morton started buying ether from a local chemist and “began exposing himself and a menagerie of pets to ether fumes. Satisfied with its safety and reliability, he began using ether on his dental patients,” Dr. Howard Markel writes on PBS.org. “Soon, mobs of tooth-aching, dollar-waving Bostonians made their way to his office. Morton relished his financial success but quickly perceived that Letheon was good for far more than pulling teeth.”

Historical accounts say Morton hoped to make a fortune off his “discovery,” but he ran into many snags before and afterward. Morton worked with another dentist, Horace Wells. In 1845, just one year before the first successful surgery with anesthesia, Morton and Wells had been experimenting with nitrous oxide (“laughing gas”). During one infamous demonstration at Harvard Medical School in 1845, the two dentists failed at deadening the pain of a subject having a tooth pulled, causing major humiliation for both men.

In 1844, Morton had been listening to lectures of Harvard chemistry professor Charles Jackson about how the organic solvent sulfuric ether “could render a person unconscious or even insensate,” as PBS.org explains.

Timeline for History of Anesthesia 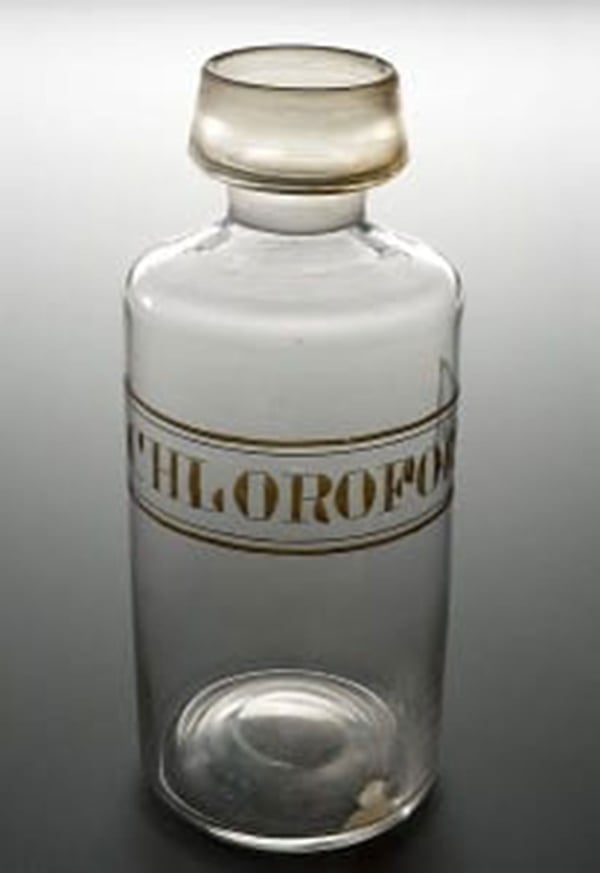 Discover if a career in Anesthesiology is right for you.

Learn why 89% of doctors would choose the same specialty again. 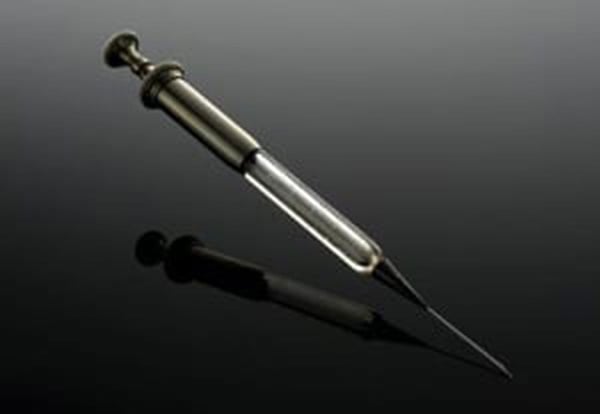 Drs. Charles Pravaz (1791-1853) and Alexander Wood (1817-1884) “independently invented the hollow hypodermic needle, which will be attached to an earlier invention, the syringe popularized in 1845 by Ireland's Francis Rynd.”

CHLOROFORM USED AS ANESTHETIC FOR QUEEN VICTORIA: Chloroform was used on Britain's Queen Victoria when she gave birth to Prince Leopold in 1853 & Princess Beatrice in 1857. Photo: Wikimedia Commons

“Dr. John Snow (1813-1858)-A full-time anesthetist since 1847, Dr. Snow popularizes obstetric anesthesia by chloroforming Queen Victoria for the birth of Prince Leopold (1853) and Princess Beatrice (1857).” His books On the Inhalation of the Vapour of Ether and On Chloroform and Other Anaesthetics enlightened physician-anesthetists. His sourcing of the 1854 London cholera epidemic to the Broad Street water pump founded epidemiology.” 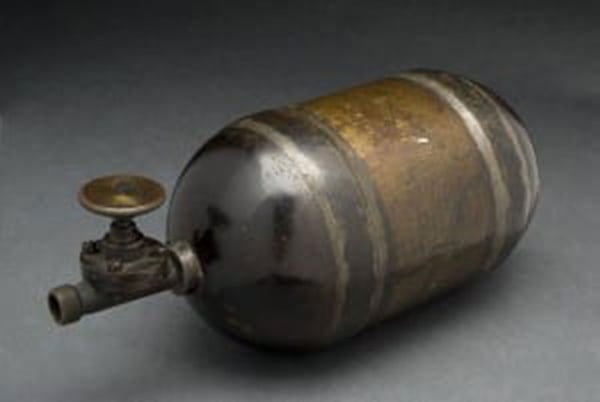 “Dr. Edmund Andrews (1824-1904) of Chicago proposes using nitrous oxide mixed with oxygen as an anesthetic in the Chicago Medical Examiner.” 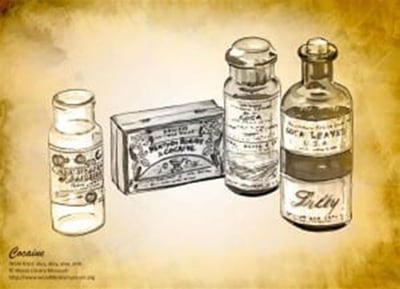 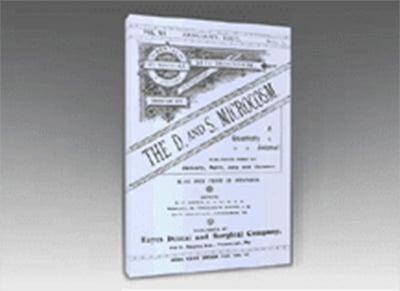 At the Philadelphia College of Dentistry, Henry I. Dorr, MD, DDS was appointed as the world's first Professor of the Practice of Dentistry, Anesthetics and Anesthesia. "The world's first unidisciplinary 'Professors of Anesthesia' will follow in dentistry at Chicago's American College of Dental Surgery (1892, George Leininger, MD) and in medicine at the New York Homeopathic Medical College (1903, T. Drysdale Buchanan, MD)."

In Pittsburgh, Pennsylvania, “The Dental and Surgical Microcosm is published as the world's first journal ‘devoted chiefly to the science of Anesthesia and Anesthetics.’ " 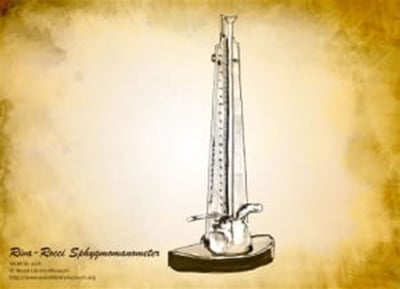 “Medical students E. Amory Codman (1869-1940) and Harvey Cushing (1869-1939)-develop the first anesthesia record using observed respiratory rate and palpated pulse rate. By 1901, Cushing will add blood pressure measurement by Riva Rocci sphygmomanometry; by 1903, respiratory rate and heart rate as auscultated by precordial stethoscope (use of which was pioneered by Cushing on dogs and by his favorite physician-anesthetist, S. Griffith Davis, on patients).”

(Photo, inset right) HEWITT WIDE-BORE INHALER: Developed by Dr. Frederick William Hewitt of the U.K., it was a modification of the earlier Clover Ether Inhaler. Unlike the Clover, this one can be refilled with ether while still in use. Dr. Hewitt's 'oral airway' is introduced in 1908. Photo: © Wood Library-Museum. www.WoodLibraryMuseum.org 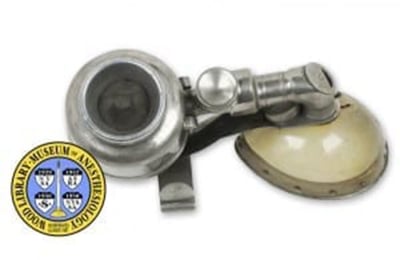 “The first of two editions of Anesthesia, the USA's first such comprehensive textbook, is published by Dr. James T. Gwathmey, the 1912 NYSA President.”

“Dr. Dennis E. Jackson develops a carbon dioxide (CO2) absorbing anesthesia system, allowing for a patient to re-breathe their exhaled air containing the anesthetic, cleansed of the carbon dioxide, resulting in the use of less anesthetic and the avoidance of waste.”

“The first of seven editions of The Art of Anaesthesia is published by Dr. Paluel J. Flagg, the 1919-1920 ASA President.”

“Arthur Guedel publishes his eye signs of ether anesthesia in the American Journal of Surgery. His Guedel (oral) airway is still used today, and he has been memorialized by the Arthur E. Guedel Memorial Anesthesia Center, San Francisco, CA.”

“From Cleveland, Ohio, Current Researches in Anesthesia and Analgesia is launched by Francis H. 'Frank' McMechan (1879-1939) as the world's first journal published by an anesthesia society, the International Anesthesia Research Society.” 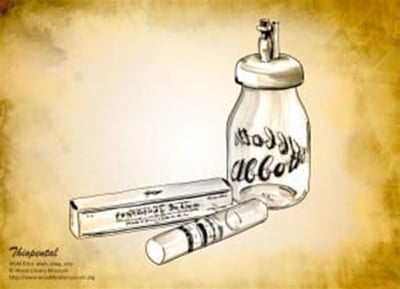 “Dr. Ralph M. Waters arrives at the University of Wisconsin, Madison. From there he will train his anesthesia residents (Waters' trainees were affectionately known as 'Aqualumni') in one of the world's 1st university-based residency training programs in anesthesiology. Waters also will pioneer carbon dioxide absorbing apparatus (To-and-Fro Canister), will clinically introduce intravenous sodium thiopental and inhalational anesthetic cyclopropane, and will become the ASA President in 1945.”

“The Anaesthetists' Travel Club is organized by Dr. John S. Lundy, who will popularize use of the intravenous anesthetic thiopental (Pentothal) and will become the ASA President in 1946. The popularity of thiopental-as a swift-onset intravenous agent for inducing general anesthesia-will pave the way for other totally unrelated intravenous induction agents, such as ketamine, etomidate, and propofol.”

“To the NYSA (the future ASA), Dr. Paul M. Wood formally donates his personal collections, which form the basis of his future namesake, the Wood Library-Museum of Anesthesiology.” 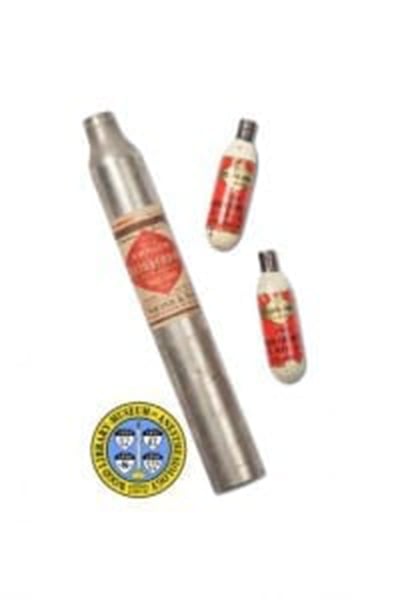 “Dr. Emery A. Rovenstine arrives at Bellevue Hospital in New York to establish a premiere residency there. Having co-pioneered in the 1930s the use of cyclopropane and punch-card databases of his anesthesia cases, he co-founds the American Board of Anesthesiology and New York's Postgraduate Assembly in Anesthesiology. He will serve as the 1943-1944 ASA President and will receive the ASA's Distinguished Service Award in 1957.”

“Two years after forming as a subsidiary to the American Board of Surgery and the year after administering its first written examination, the American Board of Anesthesiology (ABA) is granted independent board status. The ABA helped define anesthesiology as a medical specialty and provided the American medical establishment with formal recognition of physicians specializing in the art and science of anesthesia. An ABA founder, Dr. Paul M. Wood also serves as Business Manager for Anesthesiology, the journal that the ASA begins publishing in July of 1940.”

"Dr. Robert Hingson develops Continuous Caudal Anesthesia, an innovation in obstetrical anesthesia that provides continuous pain relief for prolonged or difficult labor. In 1958, Dr. Hingson starts Brother's Brother, a nonprofit charity for supplying medical, educational, and agricultural supplies worldwide. His needle-free 'Peace Guns' would mass-immunize millions by jet injection and would be featured as the 'Hypospray' in Star Trek and many science-fiction films." 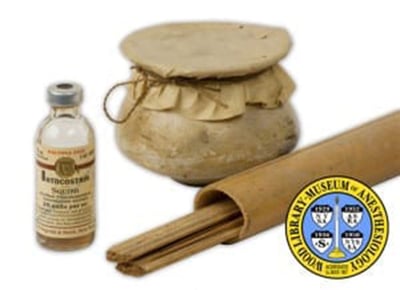 “Drs. Harold Griffith (1894-1985) and Enid Johnson (1909-2001). Squibb's Lewis H. Wright, MD supplied pharmaceutical grade curare to Drs. Griffith and Johnson for the world's 1st successful anesthetic use of the muscle relaxant. The curare had been received by Squibb in raw form in 1939 following Ecuadorean expeditions by Richard C. Gill (1901-1958).” 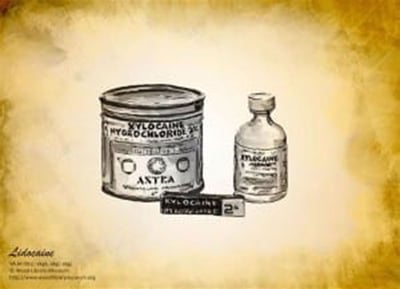 “Dr. Virginia Apgar (1909-1974)-Publishes now-universal APGAR Score to assess the health of newborns. She will direct the precursor to the March of Dimes and will be honored (1994) as the 1st female anesthesiologist to grace a U.S. postage stamp.”

(Photo, inset right) LIDOCAINE: Clinically introduced in Sweden by Torsten Gordh. M.D. as a local anesthetic. Proved to be longer lasting than others with lower risk of adverse effects. Photo: © Wood Library-Museum. www.WoodLibraryMuseum.org 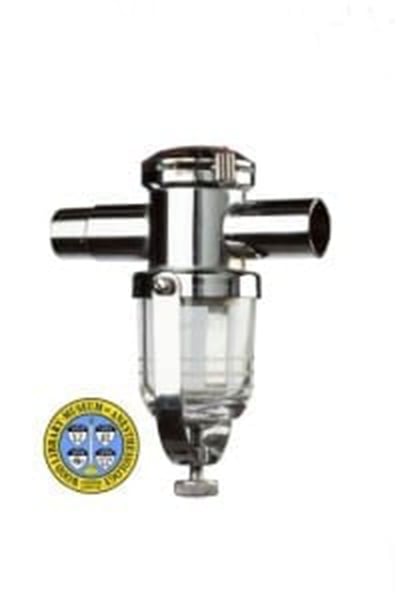 “Dr. Paul M. Wood passes away and his namesake Wood Library-Museum opens 6 months later in a two-story annex to the ASA's one-story headquarters on Busse Highway in Park Ridge, Illinois.’

“The ASA launches the Self-Evaluation Program, the first in a series of educational initiatives for members. Renamed the Self-Education and Evaluation Program (SEE) by 1979, this initiative provides a self-assessment which practitioners could complete at their own convenience. SEE enables anesthesiologists to gain an objective measure of their professional knowledge and provides guidance for continuing education. By 2004, the Anesthesiology Continuing Education Program (ACE) was launched. ACE facilitates lifelong learning by allowing practitioners to assess their status of knowledge, identify any areas of improvement, and prepare for the written anesthesiology recertification examination.” 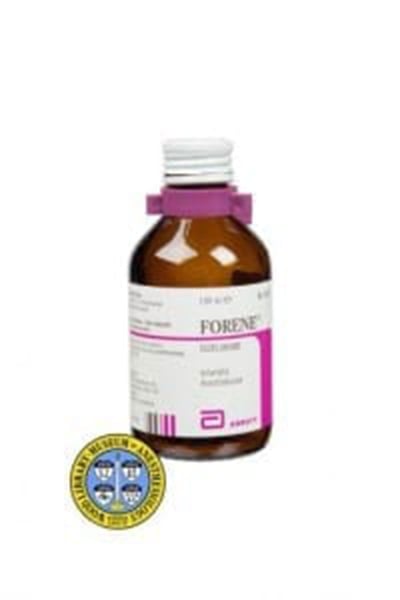 “Isoflurane is clinically introduced as an inhalational anesthetic.”

“The Anesthesia Patient Safety Foundation (APSF) is founded by the ASA.”

(Photo, inset right) ISOFLURANE: Clinically introduced as an inhalational anesthetic in 1972. It is found to be safer & more effective than halothane. Isoflurane receives FDA approval in 1981. Photo: © Wood Library-Museum. www.WoodLibraryMuseum.org 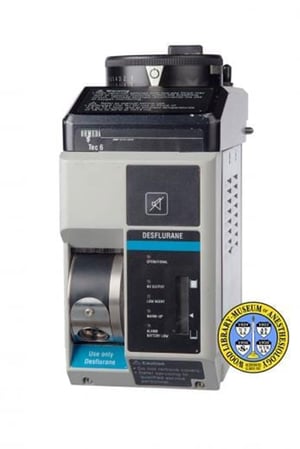 “Desflurane is clinically introduced as an inhalational anesthetic.”

“The ASA publishes its first Difficult Airway Algorithm, specifying a safe and systematic approach to assisted ventilation in patients under general anesthesia.”

“Sevoflurane is clinically introduced as an inhalational anesthetic.”

“The ASA establishes an online presence for communication with members and the public. A website will coalesce into www.asahq.org.”

“In its report To Err is Human, the Institute of Medicine lauds the efforts of anesthesiologists in improving patient safety.”

“Starting in 2000, Maintenance of Certification (MOCA) begins for newly-minted Diplomates of the American Board of Anesthesiology (ABA). Over the next dozen years, individual ASA members and then a formal ASA committee work with the ABA to establish a Simulation Education Network (SEN) to assist in educating and certifying anesthesiologists in their medical specialty.”

“The Anesthesia Quality Institute (AQI) is founded by the ASA.”

“The ASA Charitable Foundation is established.”

“As its membership numbers pass 50,000, the ASA breaks ground for its Schaumburg, Illinois complex.”

“The ASA moves into its new Schaumburg, Illinois complex.”

We would appreciate you checking out some of our other popular blog posts: