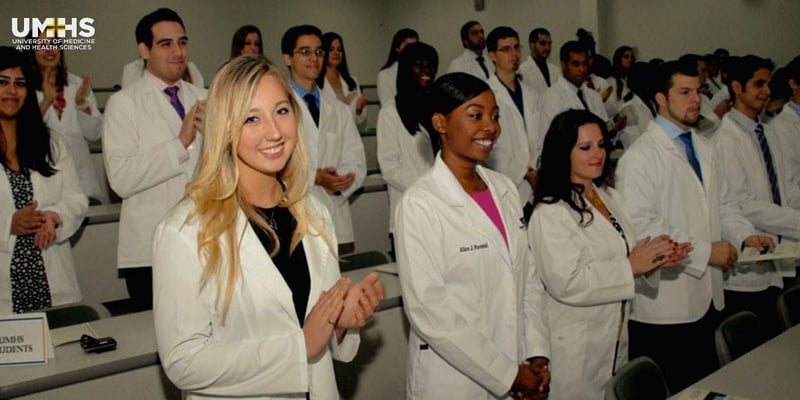 The White Coat Ceremony - A Rich Tradition For Medical Students

White coats worn by both doctors and medical students have a proud and surprising history. Yet, they have not always represented the sterility and antiseptic nature of medicine. Some doctors don’t wear white coats at all and others feel they spread germs or are signs of elitism. However, overall they are symbols of healing for healthcare professionals and help build trust in the doctor-patient relationship.

We will examine the reason why doctors did not originally wear white coats, why they started wearing them, the significance of white coats, when white coats became standard for most physicians, the first White coat ceremony at medical schools, why medical students wear shorter coats than fully licensed doctors, the type of specialists who do not wear white coats, and more. 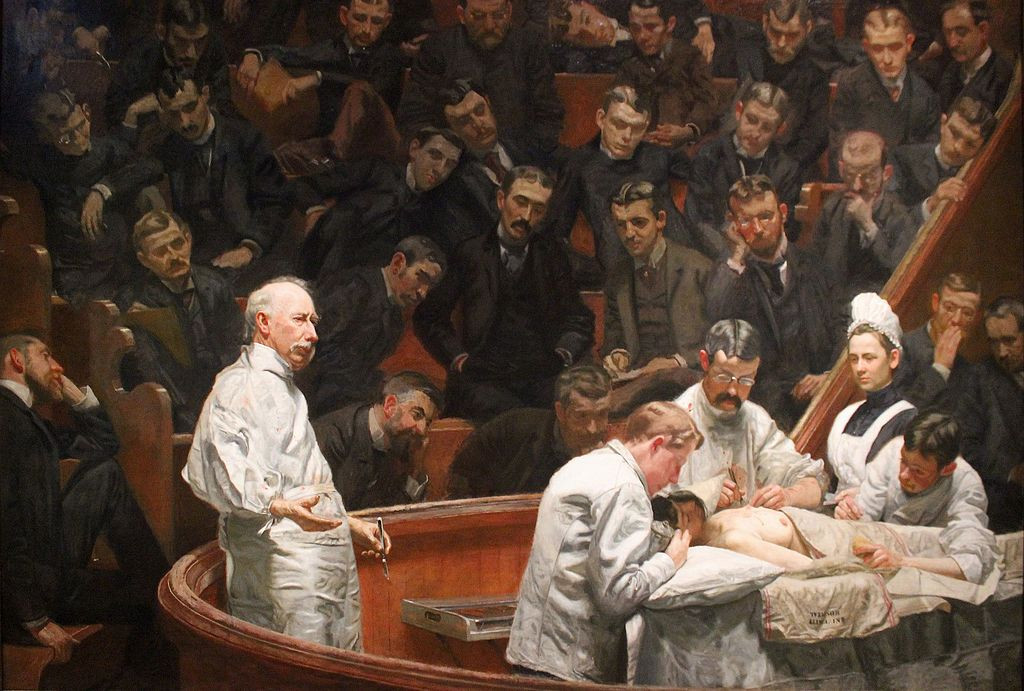 The Evolution of Doctors Wearing Medical Coats- From Black to White

Until the late 1800s, doctors wore black, similar to priests and other clergy members. “Physicians dressed themselves in black and were painted in black garb until the late 19th century,” writes Mark S. Hochberg, MD in the AMA Journal of Ethics. “Black attire was, and is, considered formal (e.g., today's tuxedo). Until about 1900, physicians wore black for their patient interactions since medical encounters were thought of as serious and formal matters. Clergymen also dressed in black, which indicated the solemn nature of their role in encounters with parishioners. An additional or alternative possibility for the dark garb might be that, until the late 19th century, seeking medical advice was usually a last resort and frequently a precursor to death. Until the last third of the 1800s, an encounter with a health care professional  rarely benefited the patient. In fact, up to that point, virtually all of ‘medicine’ entailed many worthless cures and much quackery.”

Dr. Hochberg said the idea of white coats in association with doctors caught on in the USA around 1889 when painter Joseph Eakins unveiled his renowned painting “The Agnew Clinic” from the University of Pennsylvania. Hayes Agnew, MD was shown wearing a white coat while performing surgery, with assistants also clad in white. This fostered an image of doctors being clean and sanitary in their white attire, a far cry from the “snake-oil” charlatans with bogus “cures” in the Victorian era.

A photo from 1889, taken at Massachusetts General Hospital in Boston, shows surgeons “in short-sleeved white coats over their street clothes,” Dr. Hochberg writes.

The late 1800s and early 1900s were a period of great change in medicine in both the USA and Canada. In 1910, The Flexner Report by Abraham Flexner and Herman Gates Weiskotten created sweeping changes in North American medical schools to separate the good from the substandard.

Thomas P. Duffy, MD wrote extensively about The Flexner Report in a 2011 issue of the Yale Journal of Biology and Medicine. “The Flexner Report of 1910 transformed the nature and process of medical education in America with a resulting elimination of proprietary schools and the establishment of the biomedical model as the gold standard of medical training,” Dr. Duffy writes. “This transformation occurred in the aftermath of the report, which embraced scientific knowledge and its advancement as the defining ethos of a modern physician.”

Part of that ethos included having medical students, doctors and nurses wear white coats. Dr. Hochberg notes in the AMA Journal of Ethics that Flexner’s report “led to the closure of a large number of borderline medical educational institutions and the restructuring of medical education around laboratory science.”

Change actually came to the practice of medicine and the medical world years earlier when an 1892 textbook of medicine by William Osler—as well as American military bacteriologist and pathologist Major Walter Reed, MD’s chronicle of how malaria was spread by mosquitoes during construction of the Panama Canal— drove the idea of “the value of cleanliness and antisepsis” as one of the foundations of medical science, according to Dr. Hochberg.

The white coat as a symbol of medical excellence and purity continued to gain momentum as the 20th century progressed. Some believed street clothes helped spread germs easily, and there are many theories about why white coats became more and more popular for doctors. By 1915, white coats were standard garb for surgeons. By the end of World War II, with the advent of antibiotics, white coats became standard for medical students, residents and fellows, doctors, and nurses in North America.

White coat ceremonies are a rite of passage at most medical schools, but they are surprisingly a newer phenomenon that did not become common until the late 20th century. The first two well-documented white coat ceremonies were in 1989 at the University of Chicago and in 1993 at Columbia University in New York City medical schools, according to an article in the Los Angeles Times.

The Los Angeles Times writes that white coat ceremonies started at the University of Chicago medical school in 1989 after a professor complained to the Dean of Students Norma F. Wagoner that first-year medical students “were showing up in shorts and baseball caps.”

To mandate a professional look, Dean Wagoner created a ceremony in which to give medical students physician coats- a White coat ceremony. Parents were invited and students were told that “for any session where we have patients present, we expect you to look like professionals, wear the white coat and behave appropriately.”

The Columbia University College of Physicians and Surgeons followed in 1993 when Dr. Linda Lewis, the dean at the Ivy League med school, joined with the Arnold P. Gold Foundation to sponsor the “first full-fledged white coat ceremony.” The incoming class of medical students recited the Hippocratic Oath during this ceremony, something normally only done at graduation.

Arnold P. Gold, a onetime Columbia professor, said “rearranging that oath’s timing actually returns to the original concept of Hippocrates, who had students recite it at the outset of their apprenticeships.“It was a condition of training,” Gold told the Los Angeles Times in 1999. “Instead, we had them taking an oath about the kind of doctor they would become at graduation. It was four years too late.” This was the start of taking the Hippocratic Oath during a white coat ceremony.

Having a White coat ceremony is now commonplace at most medical schools. As the Los Angeles Times noted, some “are treated like mini-graduations, complete with invitations, and often followed by a buffet reception with deans and faculty.”

“For the student, the White Coat Ceremony marks a personal transition,” Dr, Purcell said. “They are entering the field of medicine and therefore students learn and must display extraordinarily high levels of professionalism and empathy. For their families and friends, it is an opportunity to feel pride and also a reminder that their loved one is going to be engaging in one of the toughest rites of passage. Their support and understanding will be essential for the next four years.”

White coat ceremonies differ from school to school, but are usually held early in the first semester. The Association of American Medical Colleges (AAMC) website notes that during most school ceremonies “a white coat is placed on each student’s shoulders and often the Hippocratic Oath is recited, signifying their entrance into the medical profession.”

How Has COVID-19 Affected The White Coat Ceremony?

The Covid 19 pandemic has changed the lives and habits of everyone. This includes med students and med schools as well. Of course, this standard rite of passage into the profession and a career in medicine can not be held as a public event. Instead, most Medical Programs including ours at the University of Medicine and Health Sciences, will use videos to document the traditional act of first putting on the white lab coat and reciting of the Hippocratic Oath. This will thus become a virtual White coat ceremony, signifying the beginning of medical careers for many students at most schools of medicine across the country ... including the MD program at UMHS. 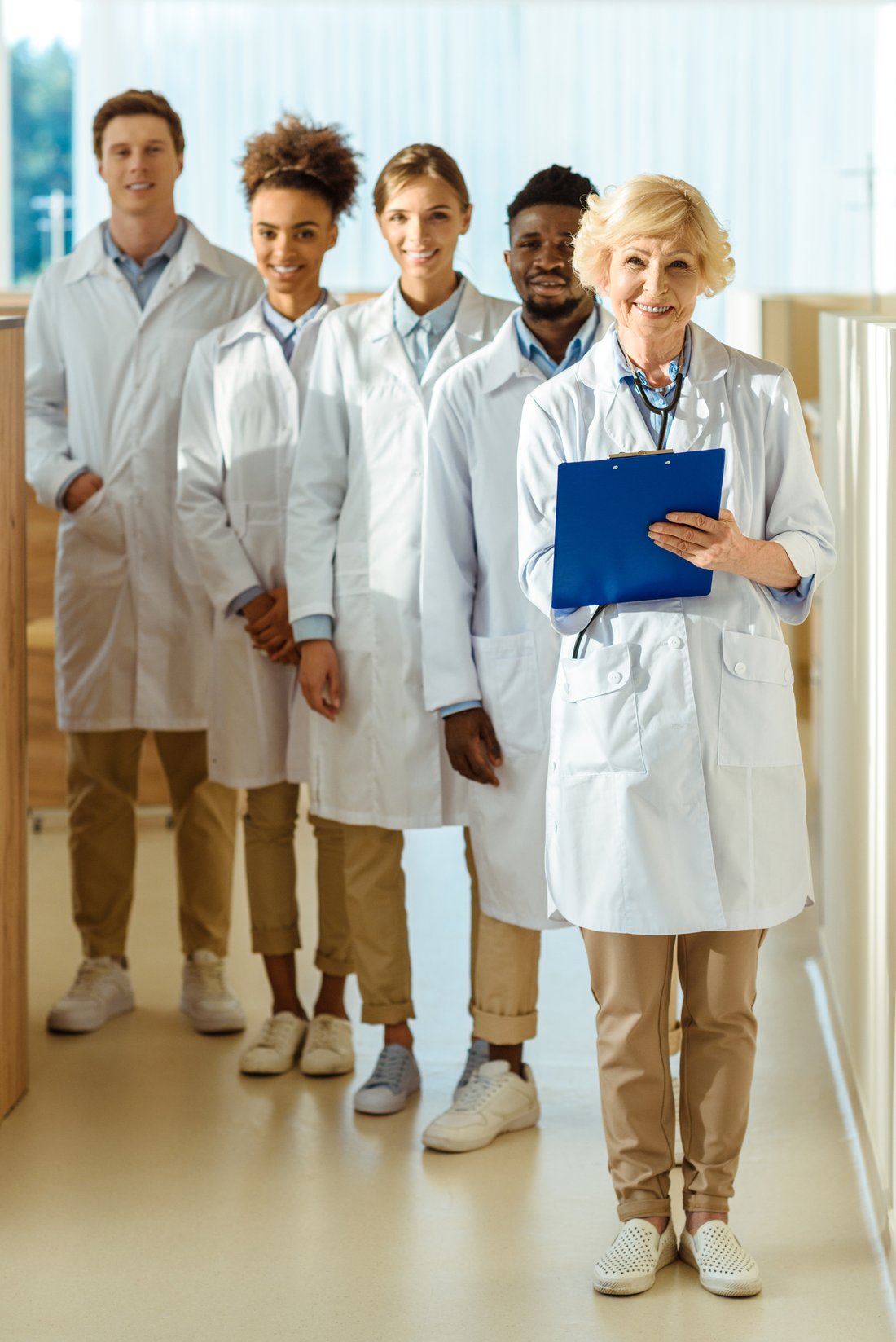 Physicians with the most experience wear the longest white coats. Photo: Deposit Photos.

What Do The Different White Coat Lengths Indicate?

Back in 2010, the American Medical Association considered banning white coats entirely because some critics said the coats spread germs between doctors and patients. More than a decade later, white coats are still standard for most doctors and healthcare providers and are worn during patient care.

The medical news site EmpowHER explained what the different lengths of white coats mean and why some coats are longer than others in a detailed post by Lisa Hall, “What Do Physicians’ White Coats Mean? “White coat lengths correspond to the level of training a physician has received after completing requirements for medical school (typically a bachelor's degree and passing the MCAT exam),” Ms. Hall said. “The standard medical school curriculum lasts four years, with two years of basic sciences and two years of clinical rotations, where students begin to work with patients. The rotations expose students to various fields of medicine to help them determine which one they would like to pursue upon completion of medical school. Students who graduate from medical school receive an MD (medical doctor) or DO (doctor of osteopathy) degree. MD and DO training are very similar, and both degrees allow for licensing in all 50 states and hospital privileges.”

Bernard Karnath, MD, an Internal Medicine physician in Galveston, TX, explained why medical students wear short coats in an article published in the Journal of General Internal Medicine “A Symbol of Our Profession: White Coat Ceremony Address to the Class of 2014.”

Dr. Karnath quotes the book Short White Coat by Dr. James Feinstein, stating “the short white coat has come to epitomize the role of the medical student: the coat is barely long enough to carry all of the educational tools and books of a medical student, but plenty short enough to remind any onlooker of the novice within.” Dr. Karnath notes that the length of white coats “is a mechanism used by patients to identify the role of each care provider.”

After the initial White coat ceremony and graduating from medical school, most new MDs or DOs can begin the actual practice of medicine but complete one of many available medical residency programs. Residents wear a mid-length white coat.

Why Do Fully Licensed Physicians Wear The Longest White Coat?

Only fully licensed physicians wear long white coats. This is why you may notice that, even in your personal medical doctor’s office, your primary care physician wears the longest white coat and other medical healthcare workers wear shorter coats. This is explained in simple terms in the post “Length of Your Doctor’s Lab Coat Has Special Meaning” by Margaret Minnicks on the site Hubpages.

Not all physicians wear white coats. The AAMC website reports that psychiatrists and pediatricians often avoid white coats because they create unnecessary anxiety for patients.

“Pediatricians and psychiatrists have been more vocal about avoiding them, for example, in part because patients find them threatening,” the AAMC site notes. “The Mayo Clinic instructs its physicians to wear business attire only, citing a need to break down the barrier between physicians and patients.”