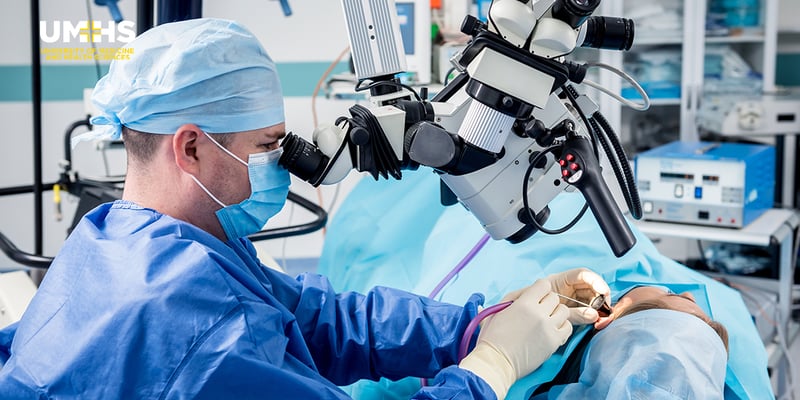 An Otolaryngologist is a board-certified Physician with an Allopathic medicine (M.D) or Osteopathy (D.O.) degree that has completed a five-year medical residency program. They practice in the field of medicine known as Otorhinolaryngology, also commonly referred to as Otolaryngology.

Some common medical conditions that an Otolaryngologist may diagnose and treat include:

What is the Difference Between an ENT, an Otolaryngologist, and an Ear Nose and Throat Doctor?

There is NO difference between an ENT, an ENT doctor, an Ear Nose and Throat doctor, an Otorhinolaryngologist, and an Otolaryngologist. These are all terms for the exact same Medical specialist.

What Do Otolaryngologists Do?

Otolaryngologists, also called otorhinolaryngologists and ENT physicians, treat patients of all ages with conditions and disorders that affect areas including: the head, neck, ears, throat, nose, upper respiratory system, and upper esophagus. Many otolaryngologists work in a clinic setting outside of the hospital where they perform procedures, as well as in a surgical setting within the hospital. Otolaryngologists commonly treat complaints associated with the ears (such as vertigo, tinnitus,  and congenital auditory malformations), the nose (such as sinusitis and polyps), the throat and esophagus (such as cancer, speech and swallowing disorders) and the head and neck (such as correcting facial trauma, cancer, and infections).

Discover if a career in Otolaryngology is right for you.

Learn why 90% of doctors would choose the same specialty again.

Yes, Otolaryngologists perform surgery. After graduating from Medical school, these highly skilled Physicians complete a five-year residency program and are trained to perform surgery on the head, ears, nose, and throat. Some of the more common surgeries they perform include:

In the United States, the medical specialist known as an Otolaryngologist has 7 syllables

Click on the soundcoud below to hear the correct way to pronounce Otolaryngologist inside the United States.

Another pronunciation exists inside the United States.  It is widely used but less preferred.  Click on the Soundcloud below:

What is an Average Otolaryngologist Salary?

The average salary of an Otolaryngologist may vary according to the study referenced, but the two largest sources report the following salaries:

According to the Medscape Physician Compensation Report 2020:

For those that pursue a position in Academics, According to AAMC Careers in Medicine:

What is a Rhinologist and How Are They Different from an ENT Doctor?

A Rhinologist is an Allopathic medicine or Osteopathy trained Physician that has completed medical school followed by a 5 year Otolaryngology residency and a 1 year fellowship in Rhinology. A Rhinologist can be thought of as a subspecialist in the field of Otorhinolaryngology. A Rhinologist differs from an ENT Doctor in that rhinologists specifically focus on the medical and surgical treatment of the nose and sinus compartment, while an ENT also treats the ears and throat. Some common conditions that Rhinologists treat include:

What is an Average Rhinologist Salary?

The average salary of a fellowship trained rhinologist has not been definitively published. However, according to The American Academy of Otolaryngology- Head and Neck Surgery, a fellowship trained otorhinolaryngologist, rhinology or otherwise, can expect to make $50,000- $75,000 more a year than a otorhinolaryngologist that has not completed a fellowship. With extrapolation from the Medscape Physician Compensation Report 2020 sited above, this gives an estimated Rhinologist salary as between $505,000 -$530,000 (+ incentive bonus) per year.

What is an Otologist/Neurotologist and How Are They Different from an Ear Nose and Throat Doctor?

A Otologist is an Allopathic medicine or Osteopathy trained Physician that has completed medical school followed by a 5 year Otolarngology residency and a 2 year fellowship in Otology which is normally combined with Neurotology. Many times, these physicians are described as specialists in Otology/Neurotology and Skull Base Surgery. An Otologist can be thought of as a subspecialist in the field of Otorhinolaryngology. An Otologist differs from an ENT Doctor in that they are devoted specifically to the medical and surgical treatment of the ear and conditions affecting anatomical structures near the ear, such as hearing loss. Some common conditions treated include:

What is an Average Otologist Salary?

The average salary of a fellowship trained Otologist/Neurotologist has not been definitively published. However, according to The American Academy of Otolaryngology- Head and Neck Surgery, a fellowship trained otolaryngologist, in the subspecialty of Otology or otherwise, can expect to make $50,000- $75,000 more a year than a otolaryngologist that has not completed a fellowship.  With extrapolation from the Medscape Physician Compensation Report 2020 sited above, this gives an estimated Otologist salary as between $505,000 -$530,000 (+ incentive bonus) per year.

How Has COVID-19 Affected Otorhinolaryngology Practitioners?

Since the beginning of 2020, COVID-19 has had a huge impact on jobs nationwide. Physicians and other healthcare related jobs are no exception. Overall, medical practices in the U.S. report a fifty-five percent decrease in revenue and a sixty percent decrease in average patient volume since the beginning of the COVID-19 crisis. Due to this drastic decrease in revenue, medical practices and hospitals have furloughed and laid off employees including 43,000 healthcare workers in March 2020 alone. Nine percent of independent medical practices state they have at least temporarily closed their practices. As social distancing guidelines remain in effect, remote patient engagement has soared and increased by an astounding two hundred twenty five percent.

Similar to general medical care and other specialties, many otolaryngology clinics either temporarily or even permanently closed during the height of the COVID pandemic in 2020. Additionally, the use of telemedicine soured. Many, if not all ENT surgeries were cancelled during this time as well.  Although many otolaryngologists have adapted to using home telemedicine and adding new safety and sanitation standards for in-person patient visits and surgeries, many are not seeing their pre-COVID number of visits. However, once the pandemic passes, and more individuals are healthy, it is estimated that visits to an otolaryngologist will increase due to several lingering side effects of COVID including the most medically pronounced, anosmia (inability to smell).

What Are Some Common Otolaryngology Organizations?

Interested in becoming an Ear Nose and Throat Doctor?  It all begins with getting your M.D. degree.  Let The University of Medicine and Health Sciences in St Kitts - one of the  top rated Caribbean Medical Schools guide you to fulfil your dream to become a Physician.  Click on the banner image below to get some information!

Callie Torres is a Captain in the United States Air Force and a resident at Wash U/Barnes Jewish Hospital in St Louis. She is a freelance writer with many published medical articles as well as multiple peer-reviewed medical publications